By bus the journey from Sungai Nibong, on Penang Island, to Melaka (also known as Malacca) is scheduled to take just under 7 hours.

There are 8 direct bus services a day from Sungai Nibong to Melaka which are available to book online.

Use the Search Box below to buy your bus tickets from Sungai Nibong to Melaka. 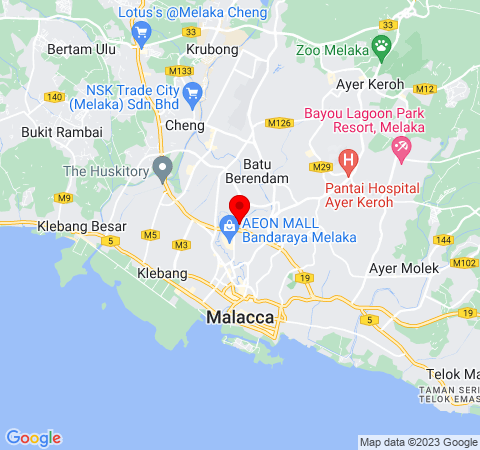 Melaka, which has been designated a UNESCO World Heritage site jointly with George Town in Penang, is one of the most popular tourist destinations in Malaysia. Indeed, Melaka is so popular that the city centre attractions can become very crowded particularly during public holidays in Malaysia and Singapore. Melaka isn’t connected to Malaysia’s excellent railway system but it does have good road connections, a large bus station and an airport. In term of other facilities, such as hotels, shops and restaurants, Melaka is also a first class destination. What makes Melaka so popular with tourists, however, is its rich history and liberal multi-cultural atmosphere. Like Penang, Melaka is a city where ethnic Malay heritage mixes closely with Chinese, Indian and even Europe traditions, and the city’s architecture, religion, language and cuisine reflects this.

Melaka has a unique history. The city was established in the early 15th Century by the Sultan of Singapore who fled there after his island state was invaded. During this early period of the city being a Sultanate China was very influential as a protector and Chinese immigrants came and settled there. Melaka still has several large Chinese temples, the most prominent being the Cheng Hoon Teng Temple. In 1511 Portuguese military forces captured Melaka. The Portuguese failed to take full advantage of the city’s strategic trading position, nor did they invest heavily in municipal works, but they did bring European cuisine and Catholicism. A Portuguese community still exists in Melaka as does one of the churches they built, St. Paul’s Church, which is located on a hill right in the centre of the city. After the Portuguese came the Dutch in 1641. Dutch settlers had a much bigger impact on the city building several municipal buildings of some note, including Christ Church Melaka and the Stadthuys, as well as building up the city’s defensive wall. The city then passed to the British in 1824 who kept control, save for a period of 3 years when the Japanese occupied the city, up until Malaysia attained its independence. During British rule the local economy developed tremendously as they fully exploited the port town’s potential as a trading centre, although there is a noticeable absence of British architecture presumably because the city was already full of historical buildings created by earlier regimes.