By bus the journey from Mersing to Melaka is scheduled to take 4 hours 16 minutes. Mersing is the arrival point for ferry services from Tioman Island.

Travel Times from Mersing to Melaka

There is 1 daily direct bus service from Mersing to Melaka which you can book online.

Buy Tickets from Mersing to Melaka

Use the Search Box below to buy your bus tickets from Mersing to Melaka.

Bus services from Mersing to Melaka depart from Mersing Jetty Gateway which is the ferry port for connections from Tioman Island. 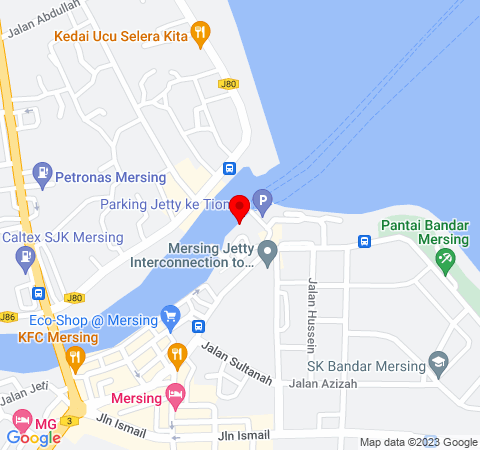 Melaka is a fairly large city with around 800,000 permanent residents that is one of the most popular tourist destinations in West Malaysia. The city has a long and interesting history which UNESCO has recognised by awarding it World Heritage Site status. The city was established in the 15th Century by the former Sultan of Singapore who fled there after being defeated in battle. Melaka is located in what was a strategically important point on the straits between the Malay peninsula and the island of Sumatra which was an important shipping route. This meant that colonial European powers were interested in the capturing the city as a means of gaining control over trading routes. The first colonial settlers were the Portuguese who took over the city in 1511. They in turn were replaced by the Dutch who invaded Melaka in 1641. Dutch rule lasted nearly 200 years until the British Empire took control of the city in 1824. All of these colonial powers left their mark on the city both in terms of what they built and also in terms of the culture of the city. As did the many immigrants from all over Asia who came to the city to work there or to become involved in the lucrative international trade of a wide range of commodities.

The historic centre of Melaka is typically packed full of tourists, particularly on Malaysian national holidays, with brightly coloured cycle trishaws blaring out loud music in the hope of attracting customers. Despite the high volume of tourists Melaka is a wonderful place to visit with fantastic hotels, bars and restaurants. In this respect it is similar to Georgetown in Penang. There are lots of places to visit and thing sto do in Melaka and it is well worth visiting for a couple of days. The main tourists attractions are all located in a small area near Dutch Square and these include: