The T-Hotel in Melaka, also known as Malacca, is a conveniently located city centre hotel ideal for single travellers and couples with a small budget who want a short stay in the city.

Good points about the T-Hotel Melaka

The T-Hotel Melaka is not expensive. Booked online the standard double or twin rooms cost around 50 MYR a night which is a lot less than many of the other city centre hotels in the popular tourist destination of Melaka. The hotel is also good value for money. The rooms are well decorated and clean.

The T-Hotel Melaka also has a good location. The main tourist sites, like Dutch Square and Jonker Street Night Market, are a 1.1 km walk away. There are also lots of restaurants nearby and the large Dataran Pahlawan Melaka Megamall shopping centre is 260 metres away.

The T-Hotel Melaka is also a friendly hotel. The young reception staff are quick to help if you need something.

Rooms at the T-Hotel Melaka

The rooms at the T-Hotel Melaka are small. There is enough room to walk the around the side of the beds but not much more. This is, however, normal for the centre of Melaka where room sizes are typically smaller than other less popular cities in Malaysia. None of the room are really suitable for families with children, but single travellers and couples will find the rooms comfortable enough for the price.

The bed in the room where I stayed was comfortable and the air-conditioning worked. There were no English language channels on the TV but the WiFi worked well. The room also had several electrical sockets.

The bathrooms at the T-Hotel Melaka are small. The water in the shower was hot and the toilet and sink worked well. For the room price the bathrooms were adequate. Like hotel bedrooms, small bathrooms are fairly normal for hotels in Melaka city centre.

Facilities at the T-Hotel Melaka

The T-Hotel Melaka doesn’t have any communal facilities like a swimming pool or a gym. To get those types of facilities in Melaka you need to pay three times the room rate charged at the T-Hotel.

One thing the T-Hotel doesn’t have is a lift. Most, but not all, of the 29 rooms are located up one or two flights of stairs. If you have problems with walking up stairs or heavy luggage then you may want to spend more money on a hotel with a lift as none of the budget hotels in Melaka city centre appear to have elevators installed. 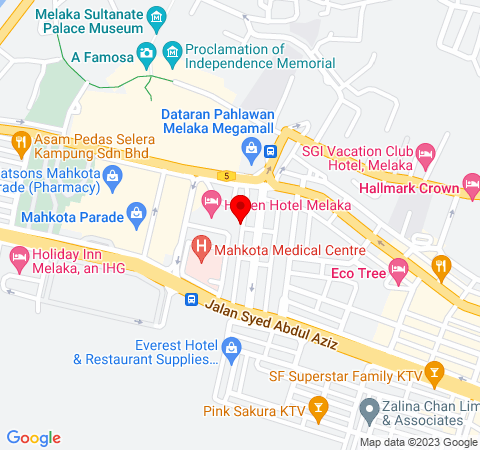 Next read about Travel from Melaka to Penang