By bus the journey from Baling to Ipoh is scheduled to take from 3 hours 42 minutes to 4 hours 23 minutes depending upon which bus service you take.

Bus Times from Baling to Ipoh

There are three bus services a day from Barling to Ipoh which are available to book online.

Use the Search Box to buy your bus tickets from Barling to Ipoh. 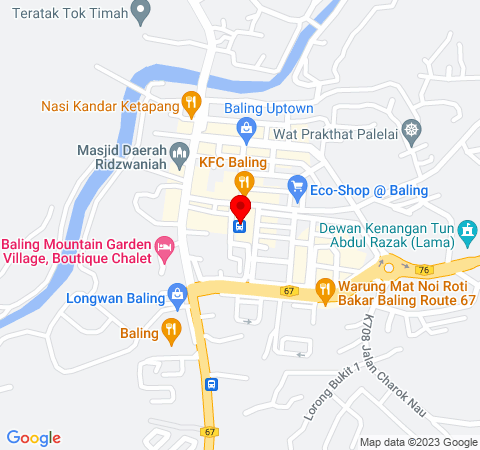 About travel to Ipoh

AmanJaya Ipoh Bus Station is located 10 km by road to the north of Ipoh’s popular Old Town area. The cheapest way to travel from AmanJaya Ipoh Bus Station to Ipoh city is to take a local bus service. Perak Transport runs a shuttle bus service into Ipoh from the 1st floor of AmanJaya Ipoh Bus Station. Taxis are quicker but a lot more expensive. If you are staying overnight in Ipoh then we recommend that you stay in the grid of street between the railway station and the Kinta River as this is part of the city with the most lively restaurants and bars, and it is also near to Ipoh’s main city centre tourist attractions.

From the 1880 through to the 1970s Ipoh was a town which prospered from the local tin mining industry. The British colonial government built some spectacular public buildings such as the magnificent Ipoh Railway Station, often described as the ‘Taj Mahal of Ipoh’, the Old City Hall, and the Old High Court building. Nearby are the narrow streets of Ipoh’s China Town, including the atmospheric Concubine Lane which is one of Ipoh’s most popular tourist attractions. The city’s main historical buildings can be seen by following Ipoh’s sign posted Heritage Trail, which takes about two hours to walk. A more recent addition to the city’s tourist attractions are its wall murals. Ipoh’s street art movement began in 2014 when Malaysian coffee company OLDTOWN commissioned 8 murals from accomplished street artist Ernest Zacharevic. Since 2014 other local artists have joined in adding an impressive array of inventive wall murals across the city centre which now attract as many visitors as the city’s many historical buildings.